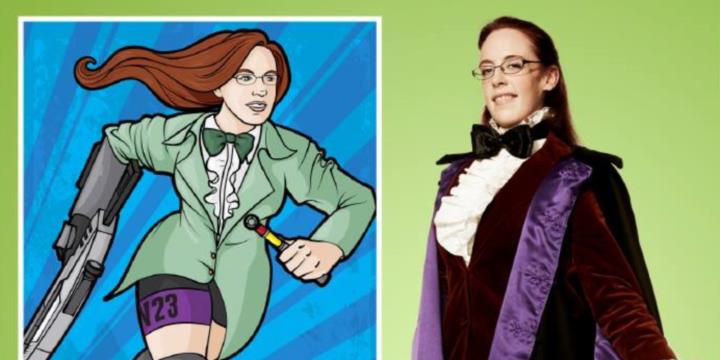 I had the opportunity to talk with King of the Nerds contestant Nicole, a chemist from chilly Wisconsin. It was a brief chat, but she’s so enthusiastic and eager about the upcoming season.

I don’t have a complete recording of our conversation, so I’ll write this interview summary working from my notes:

Nicole was “obsessed” about King of the Nerds as soon as she heard about it. She would watch every episode and discuss them with her friends.

Nicole was awestruck when she started participating. She praised hosts Curtis Armstrong and Robert Carradine and assured me that the method of determining the next King of the Nerds has been “ramped up.” While she enjoyed being with all of the other nerdy hopefuls, she asserts that fellow contestant Kayla is her “twin.” Their friendship may be something to watch in season two.

She also talked about how she became interested in chemistry. She said it snowballed through grade school all the way to college. The scientific development she’s looking forward to is a substance which is very light but can hold an adult. I noted the name as “Energel,” but a cursory Intenet search leads me nowhere. Must investigate further…

As you may have seen in pictures, she’s a HUGE fan of the Third Doctor from Doctor Who. Jon Pertwee made the alien hero into a tuxedo-clad, aikido-chopping crusader. Her favorite story is Inferno, where the Doctor enters an alternate dimension encountering evil versions of Brigadier Lethbridge-Steward and Liz Shaw — Nicole’s favorite companion.

She also liked The Three Doctors which brings together Pertwee, Patrick Troughton, and William Hartnell. It was Hartnell’s final on-screen performance.

While being a chemist, no one should laugh off Nicole’s skills in roller derby. Her bionic knee is proof of how tough the sport is.

Turning to another sports entertainment spectacle, Nicole is a fan of wrestling and self-professed “heel mark” (she roots for the bad guys). She’s also a big fan of Rowdy Roddy Piper; I referred her to the song “For Everybody” from The Wrestling Album:

This summary covers much of what we talked about. Thanks to Turner Broadcasting for arranging the interview. Do you think Nicole has what it takes to sit on the Throne of Games?