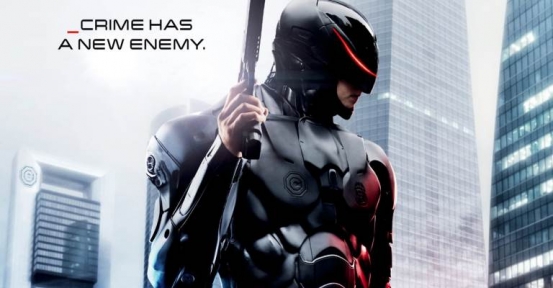 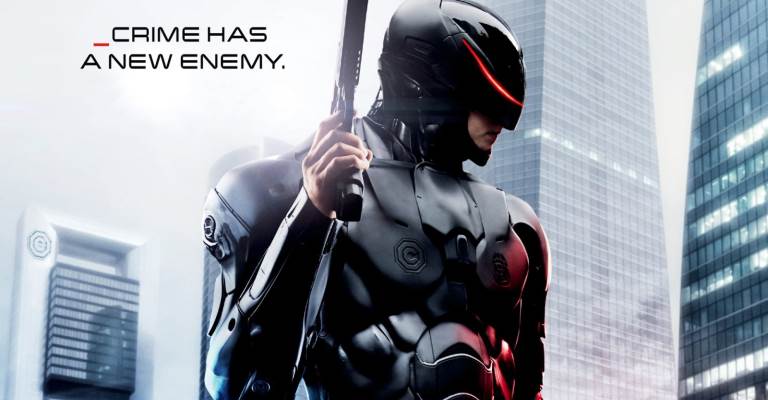 The latest model of Robocop refocuses, but not upgrades, the original. It’s a decent sci-fi action movie with good performances. Here MGM presents a near future where much of the technology featured are a few steps from being commonplace. Director Jose Padilha respects the main themes of the original while changing the context for a post-9/11 audience. The PG-13 rating means no all-out gore, but the 2014 Robocop avoids turning the hero into a toyetic action hero like in Robocop 3.

OmniCorp badly wants to put their drones and mechs into American streets, but it’s illegal to do so. They need a convincing reason for legalization, but a foul-up in Tehran isn’t it. The big powerful corporation decides to create a machine that a man can control. However, they need just the right man to do it.

Enter Alex Murphy, who acts like he just stepped out of a gritty TV police procedural. With the help of his best friend Lewis, he’s on the trail of nasty Antoine Killon. Of course, he’s “mortally wounded,” as the 1988 cartoon would say, and returns as RoboCop, “the future of American justice.” The rest of the movie has Murphy in a struggle for his family, his life, and his city.

Joel Kinnaman’s a better Robocop than Murphy. Alex J. Murphy could be mistaken for any beat cop you see on TV and doesn’t have great chemisty between him and Michael K. Williams’ Jack Lewis. Watch Almost Human starring Michael Ealy and Karl Urban for good chemistry between mismatched cops in the future. His vocal delivery as Robocop is stern and monotone, but with no cheesy robotic voice effects. Kinnaman ably shifts between man and machine aspecs of Robocop.

Here, the Murphy family is more in the foreground with Clara Murphy trying her hardest to regain normalcy. Thankfully, the wife and kid aren’t annoying or a drag to the movie. His new family at OmniCorp includes Gary Oldman’s Dr. Norton, the very sympathetic but not totally pure-hearted scientist.

This Robocop lacks the original’s satirical absurdity. While Paul Verhoeven skewers Reagan-era American culture, Padilha questions American political policy. It’s not, as I previously thought when watching the trailer, about anti-terrorism on the whole. Jackson’s over-the-top Novak provides some moments of humor. Interestingly, not even Robocop, an advanced tool of the surveillance state, can claim he’s “made in America” anymore.

The CGI-driven special effects are serviceable. One big shootout plays too much like a first-person shooter. On the other hand, a demonstration of functional cybernetic limbs early in the movies is the most impressive.

How about any fan pleasing moments? Familiar lines from the 1987 Robocop are peppered in. I didn’t see Miguel Ferrer anywhere in the movie. I was pleased that Basil Poledouris’ theme triumphantly blares in soem points of the movie. There is a take on one of Robocop’s directives that factors in the climax. The ending is effective, but not as memorable.

Robocop 2014 is the second-best Robocop movie. The reboot’s not as fresh as Verhoeven’s movie, but it’s well-paced feature in under two hours. If you want to see the movie, there won’t be trouble.