THE movie of the summer is out now and it is amazing! Even with all the fantastic jumps we’ve made in technology, this movie is teeming with the 80’s, and the amalgamation of old and new school is mind blowing.

Read spoilers for Guardians of the Galaxy.

The movie starts off by taking your emotions on one helluva roller coaster. James Gunn has done what most directors only wish they could do. He turned a whole movie genre upside down by reinventing what we didn’t even think was broken. 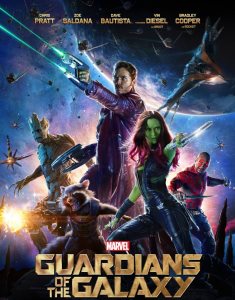 Even though it diverts from the comic in a few ways, it really does grab the viewers’ attention and introduces them to the man that all of us comic geeks are so fond of, Star-Lord. Unlike any other team movie we have been accustomed to seeing over the years, Guardians of the Galaxy puts every member in your face by introducing you to their personalities before becoming on a first name basis.

The way this team comes together is actually easier to believe than how The Avengers came together and I think the way each character interacted made for better a rapport throughout the movie. Speaking of which, he actors and actresses of this film put on nothing but award-winning performances. I was a little skeptical going into the theater but walked out knowing that each person put there all in this movie.

I cannot stress enough the sheer awesomeness of this movie. I read somewhere that they think this movie could be “this generations’ Star Wars”. I walked out believing that it is. Before I get into spoilers, I would like to point out that this has been the BEST marketing plan for any movie in recent years. I would say ever, but I haven’t noticed any before.

Now that I am done with the spoiler-free part, let me get into the spoilers! PLEASE, if you do NOT want to know anything specific about the movie, DO NOT READ PASS THIS POINT.

Guardians of the Galaxy Movie Spoilers

I honestly felt like I was watching E.T. for the first time when they did the first sequence with a young Peter Quill and he’s abducted. You find out later that he was abducted by Yondu which, in the Marvel Universe, was actually a member of the original Guardians of the Galaxy. Even though he is a far cry from his comic book persona, Michael Rooker does an AMAZING job being the leader of the Ravagers.

Peter Quill as an adult has been living in the past for so long that it essentially makes him who he is. And that does incredible things for this movie. He is a pure child of the 80’s and has the vocabulary and attitude to show for it. I have no doubt in my mind that if Bart Simpson were to grow up in space, this is how he would turn out.

Chris Pratt is forever, in my mind, the reason why Star-Lord works. I praise him for his dedication to the character and for making the character as fun as he is. Thank you for taking this epic role!!

Gamora is a beast of different sorts. When introduced, you believe that she’s this ruthless killer that will do anything for the end-game. The part that trips you up is that she has a totally different endgame than you believed. She ends up being a warrior scorned and only out to look for the best possible timing to kill her now adopted father, Thanos. Zoey Saldana…you have usurped my heart with your captivating performance.

Rocket and Groot…these two need their own movie. I thought they may not be able to transfer well to the big screen but Vin Diesel and Bradley Cooper NAILED their relationship! The amount of emotion in Groot’s words was unbelievably on it and Rocket…wow. Marvel has now made me a believer in CGI.

Both were amazing performers that need to be highlighted in this genre of movies. Let’s get that Rocket and Groot one shot! I am sure that Bradley Cooper and Vin Diesel would be more than up for it.

Onto Drax. I was extremely surprised with Drax’s character. I didn’t know which persona they would take and how his history would be revealed. Once again, Marvel decided to take a totally different approach and it paid off well. Even though Drax is now an alien in this movie, his core character is still intact. It was absolutely brilliant that he didn’t understand metaphors. It added so much more to the movie.

Even more surprising than his origin was the manner in which he interacted with the team. Drax, not being known to be a tea player, fit like a glove in this instance. Well…maybe a glove with one finger sleeve too tight. There were a few parts that he doesn’t take the high road and goes balls deep into one-on-one action. But it helps drive the movie and proves that the team is even stronger for it in the end.

Dave Bautista…I believe this is the role you were born for! You brought everything you had to the table and you brought to life a character that would otherwise had been hard to conceptualize.

On a quick side-note, can we not have Brendan Fehr as a one-off for the Nova Corps? Can he be introduced as Richard Rider? I think he and Chris Pratt would have great chemistry together!! Maybe he could even be WITH the team as a probation officer of sorts? Just a wish of mine?

The villains of this movie…I had a hard time believing that they could be hard hitters. I’ve been very vocal about it on my Facebook page and just could NOT see how Ronan was this all-encompassing bad (expletive deleted) that the trailers were making him out to be. And to have Nebula and Korath as his right-hand? I walked in thinking there was NO WAY I was going to like their relationships. Well, crow doesn’t taste bad. I walked out not wanting it any other way.

Lee Pace, Djimon Hounsou and Karen Gillan were MARVEL-ous!! I hope the comics look to them from now on when it comes to bringing these characters to life. Though, it may be a little harder for Korath….hmmm. And do NOT get me started on Thanos. I wasn’t expecting to see the big bad himself in this movie!

Seeing Thanos in all his glory helped complete the fact that Marvel just went cosmic, at least for me. Nonetheless, MTV is going to have a really hard time nailing down villain of the year when it comes to this group.

All in all, I have not had a better movie experience in my life. The amount of easter eggs (did I mention that they showed a full on Celestial?! And don’t even get me started on Cosmo and Howard The Duck!!) and the love that James Gunn (who better win Director of the Year for this) showed to fans and to the characters has made this my most favorite movie ever. Knocking Dazed and Confused (don’t judge) off of the pedestal it had been placed on since 1998.

Now, in my attempt to close this review, because I can talk about this movie for hours, I would like to thank the entire cast for the best movie experience of my life. It was a wonderful way for me and my son to share the day together and I am sure it will be a wonderful night that we will have, seeing as how I will be watching this movie again.