An all new story-lime where anyone can pick up and read! This is a GREAT issue for first time readers. It dives into the Elephantmen universe and is an absolute delight.

Right from the start you are greeted with a nice mystery throwback. “Blood Red: Picking up the Pieces”, Part One, is a tale of “whodunit?” wrapped in a shroud of suspense! Detective Farrell is called to a murder scene where he is accompanied by his beautiful lover, Scarlett. Unbeknownst to him, he’s about to run into the one and only Information Agent Hip Flask! 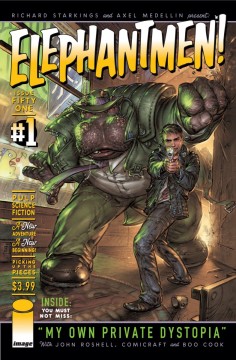 Mr. Starkings has done a wondrous job on this series and continues to amaze. With the start of a new arc, the reader is transported back to the days of authors such as Richard Starks and Charles Willeford. Crime novels used to be cleverly crafted and always had the lead detective/character following the clues with good old fashioned police work. Mr. Starkings brings a feeling of the 50’s crime novels and Blade Runner back in this fantastic read.

J.G Roshell and Gabriel Bautista have, once again, provided another installment of “Charley Loves Robots”! It keeps on progressing I love that I can always get another installment with each issue of Elephantmen. The day I finally get to collect in paperback or hardcover will be a great day.

The other great thing about this series is that, even though you are in the middle of the story for new readers of Elephantmen, you can always head on over to www.facebook.com/charleylovesrobots and pick up from the beginning! Pop on over and see what I’m talking about. You won’t be disappointed as it is a great story with some great art behind it!